Mir and Miller were fighting in close proximity throughout much of the “Moto3-style” second Qatar MotoGP race, and their duel reached a boiling point on the 13th lap, as they made contact on two separate occasions.

First, Mir fired his GSX-RR down the inside of Miller at the sharp Turn 10 left-hander, and the two washed out wide as they made contact, with Mir raising his right leg on the bike as an act of apology.

But as Mir then ran wide out of the final corner, Miller drew alongside the Suzuki man but stuck to an inside-outside trajectory through the right-hander.

This meant that the Aussie closed right up on Mir, who was straddling the kerb and was left no room to rejoin the track, eventually only managing to do so after side-on contact.

It was clear the move had left Mir livid after the race, as he and Miller gesticulated angrily at each other on the cooldown lap.

Speaking to the media subsequently, Mir said: “What happened with Jack is that in Turn 10, it is the only place where I could overtake, and I took the right position, and then he decided to stay on the outside, to maintain the line.

“We both touched a bit, then I picked up the bike, I understand that it was a risky maneuver but was not over the limit, was all right, was okay.

“And I think in the same lap I was wide in last corner and when I came back [towards the racing line], I looked, I saw Jack, he was moving the head like he saw me, and I just went to the kerb, as much outside the line as I could, and he just came across, over me, and we touched.

“We almost crashed on the straight for this reason. I think that it was super risky, a super dangerous maneuver, and that’s it, I don’t have much to say.”

Addressing the media just prior to Mir’s print media session, Miller said the incident was simply “the way the race seemed to be going”.

“It was just one of those things. I think everyone saw what happened, and we continued to race after that, not much really on that side of things,” Miller said.

“It was what it was. I know what happened there, they go wide and then they want to come back in [onto the racing line] and nobody is really concerned about where anyone else is on track.”

The contact was investigated during the race, but a “no further action” verdict was rendered well before the chequered flag fell. 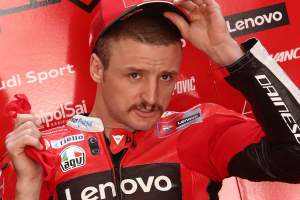 The Race understands Suzuki has decided against appealing the decision not to penalise Miller.

“I think that my team will judge if they have to appeal or something – for sure it has to be investigated because these maneuvers in MotoGP, they are over the limit,” Mir said before that decision was taken.

“If it was intentional, like I said, he deserves a penalty. If not, not. But I think that he moved the head perfectly.”

He then added: “If you have time, compare the image of Aleix Espargaro and myself to the image of Jack Miller and myself. Aleix Espargaro went wide in the last turn, he saw that I was coming, he moved a little bit on the outside of the track and I saw him also and then I didn’t come to hit him. I just respect the rivals, you know?

“And I think that Jack didn’t show the respect in this case. It was the same maneuver, same thing, but different riders. You can judge.”

Miller was not quizzed whether his move was intentional – and said nothing to indicate it was – and when asked whether he was expecting a disqualification, said: “I got hit I think three times already before, so, it seemed to be that was the way the race was going. That’s all.

“If I was black-flagged, then there’d be something happening wrong, I feel.”

Thank you for your feedback!

What did you think of this story?

Brilliant
Good
Not for me

Alex Rins and Maverick Viñales rose up the ranks to MotoGP together, but now they're both suffering from the same flaw that's preventing them from fighting for the title

Has Miller done enough for a new Ducati deal? Our verdicts

Jack Miller's first contract as a factory Ducati rider is a 2021 deal with an option for 2022, meaning it theoretically leaves him vulnerable to not even seeing out the standard two-year MotoGP works rider cycle

Honda changed in Marquez’s absence – and it’s hurting him

As Marc Marquez's fitness improves, he's starting to get a proper sense of Honda's 2021 MotoGP bike - and he's not happy with it

Morbidelli had ‘frank’ chat with Yamaha about his situation

Petronas Yamaha rider Franco Morbidelli says he’s had a “frank” discussion with Yamaha manager Lin Jarvis about his current bike spec situation, which has been a source of barely-concealed frustration for the Italian

Maverick Vinales was fastest in MotoGP's post-race test at Jerez, while his Yamaha team-mate Fabio Quartararo opted to skip the test as he continues to recover from an arm pump injury

MotoGP podcast: What to make of Ducati’s shock Jerez 1-2

Does 2021 have a new title favourite? The Race MotoGP podcast discusses a Spanish Grand Prix that yielded a very surprising Ducati 1-2

18 hours ago GT No Comments