Mar 6 2021
By Valentin Khorounzhiy
No Comments

The Noale factory has high hopes for the 2021 version of its RS-GP bike, but is going through a tough period following the recent death of Fausto Gresini – the boss of the Gresini Racing team that runs Aprilia’s race outfit.

Espargaro, who has a new team-mate this season in Lorenzo Savadori, spent much of the day at the sharp end and jumped to the front with a 1m54.687s in the penultimate hour, establishing a half-second lead over the pack. 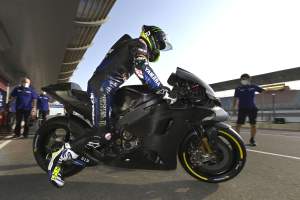 His lead was halved but not overcome, with Espargaro’s laptime – two tenths down on what Suzuki’s Alex Rins had managed to lead the corresponding day’s running from last year’s Qatar test – good enough to keep him top.

Honda tester Stefan Bradl, who topped a windy shakedown session on what was a sandier Losail International Circuit the day prior, was second-fastest behind Espargaro.

The German, who replaced regular rider Marc Marquez for most of last season and will presumably keep the race seat for as long as Marquez’s recovery continues, was likewise towards the top of the timesheets for virtually the whole duration of the seven-hour Saturday test.

In contrast, Suzuki’s reigning champion Joan Mir only ventured out right after the halfway point, with team-mate Alex Rins coming out of the pits around half an hour later, as Suzuki was content to leave the running to testers Sylvain Guintoli and Takuya Tsuda while the track was still gripping up.

Miguel Oliveira, who won last year’s season finale in Portimao and has switched from Tech3 KTM to the works KTM team, broke into the top five shortly before the chequered flag.

Johann Zarco made it two Ducatis in the top six on his first appearance with Pramac, ahead of Petronas Yamaha’s 2020 runner-up Franco Morbidelli, Rins and the factory Yamaha of Maverick Vinales.

Alex Marquez completed his first session as an LCR Honda MotoGP rider and rounded out the top 10, right ahead of team-mate Takaaki Nakagami. The younger Marquez was among those to have a crash during the day, with newly-promoted Ducati works rider Francesco Bagnaia also having a fall.

There was also a shunt for one of the three Yamaha test bikes, which are all shared by Katsuyuki Nakasuga, Kohta Nozane and new recruit Cal Crutchlow.

Valentino Rossi took 14th place in his first session as a Petronas Yamaha rider, one place ahead of Fabio Quartararo, who has replaced him in the works Yamaha set-up.

Honda’s new signing Pol Espargaro was one of the busiest riders in the field as he sampled the RC213V for the first time, completing 68 laps and ending up 1.191s off the pace in 17th.

Thank you for your feedback!

What did you think of this story?

Brilliant
Good
Not for me

Alex Rins and Maverick Viñales rose up the ranks to MotoGP together, but now they're both suffering from the same flaw that's preventing them from fighting for the title

Has Miller done enough for a new Ducati deal? Our verdicts

Jack Miller's first contract as a factory Ducati rider is a 2021 deal with an option for 2022, meaning it theoretically leaves him vulnerable to not even seeing out the standard two-year MotoGP works rider cycle

Honda changed in Marquez’s absence – and it’s hurting him

As Marc Marquez's fitness improves, he's starting to get a proper sense of Honda's 2021 MotoGP bike - and he's not happy with it

Morbidelli had ‘frank’ chat with Yamaha about his situation

Petronas Yamaha rider Franco Morbidelli says he’s had a “frank” discussion with Yamaha manager Lin Jarvis about his current bike spec situation, which has been a source of barely-concealed frustration for the Italian

Maverick Vinales was fastest in MotoGP's post-race test at Jerez, while his Yamaha team-mate Fabio Quartararo opted to skip the test as he continues to recover from an arm pump injury

MotoGP podcast: What to make of Ducati’s shock Jerez 1-2

Does 2021 have a new title favourite? The Race MotoGP podcast discusses a Spanish Grand Prix that yielded a very surprising Ducati 1-2

17 hours ago GT No Comments